The City of Greeley Ordinance in reference to the use and possession of fireworks was modified on June 7, 2022 and will go into effect on June 15, 2022. The change to the municipal code makes a violation of this ordinance a  misdemeanor offense, with a fine of $1000, plus any additional penalties assessed, which could include imprisonment.  The Ordinance also adds an additional violation for when someone knowingly provides private property for the possession and use of illegal fireworks and the penalty is the same as listed above.  To read the full municipal ordinance click on the link to the right.

With Colorado’s often dry, hot and windy summer weather, wildfires are a concern for municipalities and counties across the state. Illegal possession, storage and use of prohibited fireworks cause thousands of injuries every year, create quality of life issues for your neighbors, frighten domestic animals as well as livestock, and could result in a hefty fine and legal consequences.

Some alarming facts and figures related to fireworks safety are:

“As a 29-year resident of Greeley, I am not immune to the quality-of-life issues directly caused from the illegal possession and use of fireworks in our community during the holiday season. My officers and I are committed to honoring the citizen’s, and the council’s, wishes with the recently updated fireworks ordinances. We will be adopting a strict enforcement strategy regarding the new changes for the 2022 holiday. We hope that our citizens can work with us to have a fun, and safe, Fourth of July” said Interim Police Chief Adam Turk.

How to Report Illegal Fireworks

If you need to report an active fire, fireworks-related injury or other emergency, please call 911 immediately. You may also call the non-emergency dispatch line at 970-350-9600 to report fireworks complaints.

Another option to report hearing or seeing fireworks, please submit an online Crime Tip. This will document the date and time of the report and be forwarded to officers tasked with firework response and enforcement.

This allows us to utilize this data to effectively address problem areas in the city as they arise during the holiday season. Please understand that based on the existing call volume, staffing levels and the time-of-day, our officers may have an extended response time to the area of your complaint.

There are two professional fireworks displays planned to start on July 4th at approximately 9:30 PM listed below 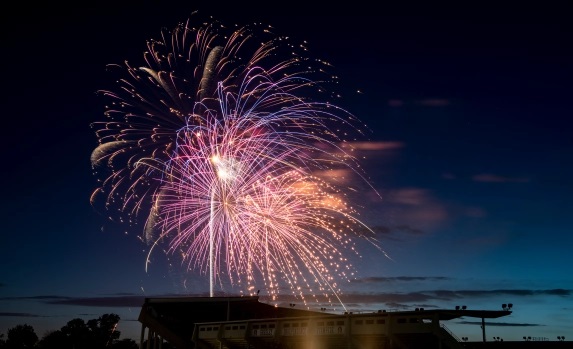