For over three decades the disappearance of Jonelle Matthews has haunted our community. With the nation rallying behind us, citizens throughout Greeley offered assistance large and small. Donations poured in for the Matthews family, volunteers scoured the vast expanse of Weld County searching for Jonelle; churches rallied their congregations with prayer vigils. The populace united around the Matthews family; Jonelle became a daughter to us all.

During those decades, generations of Greeley police officers have never forgotten Jonelle, many living in torment over the possibilities of what may have occurred that grim evening in 1984, and what could be done to solve this mystery. In 2015 detectives began a renewed investigation into Jonelle’s disappearance. In the process, additional officers, retired and newly minted, offered vital assistance.

On July 23, 2019, the human remains of Jonelle Matthews were uncovered in a desolate field southeast of Greeley. A forensic pathologist would determine she was the victim of homicide.

Early in the investigation, Steven Dana Pankey was identified as a person of interest. As the investigation progressed, evidence arose and Pankey was identified as a suspect. Working closely with the Weld County District Attorney’s Office the decision was made to present this evidence to the 2020-2021 Weld County Grand Jury beginning in September 2020.

On October 9, 2020, the grand jury issued their indictment of Steven Pankey for the kidnapping and murder of Jonelle Matthews. Subsequently, an extraditable warrant was issued by Weld County Chief Judge James Hartmann commanding the arrest of Pankey for charges including:

On October 12, 2020, Greeley Detectives Michael Prill and Robert Cash coordinated, and were present for, the arrest of Steven Pankey in Meridian, Idaho. His extradition to Weld County is expected in the near future.

Special gratitude is extended to the members of the Twin Falls County Sheriff’s Office, the Twin Falls Police Department, the Meridian Police Department and the Ada County Sheriff’s Office. Their assistance has been immeasurable. Additionally, we would like to thank the members of the FBI’s Behavioral Analysis Unit and the National Center for Missing and Exploited Children {NCMEC} for their invaluable assistance.

Lastly, to the Matthews family, we offer our sincerest condolences. We hope this development helps in some small measure. For far too long you have struggled with this anguish.

Accompanying this release are images of Steven Pankey from December 1984 and his current booking photo. 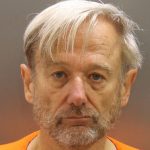